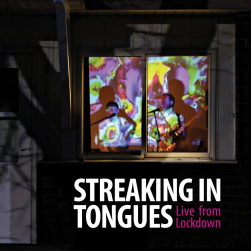 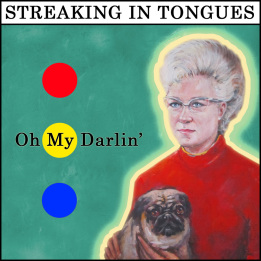 "Oh My Darlin' is the most imminently listenable and emotionally eviscerating offering from STREAKING IN TONGUES yet. Ronnie and Elliott Ferguson continue to refine their craft, creating music that's endearing and engaging. Slowly building a repertoire of challenging records covering difficult subject matter, the father/son duo has refined their distinct brand of lo-fi experimental folk music into their most coherent and powerful artistic statement yet. Oh My Darlin' explores love and divorce in frequently-uncomfortable terms, but its unflinching nature and careful construction make it the band's most gratifying listen."

“Surreal soundscapes that demand as much of a reaction out of us through the texture of their melodies as they do the substance of their soulful lyricism. I didn’t know if they were going to be able to top the majestically postmodern tour de force that was Kindergarten Prayers, but I am happy to report that STREAKING IN TONGUES’ Oh My Darlin’ is every bit the refined successor most critics (myself included) had hoped it would be.”

-Indie Shark, Pick of the Week and Catch of the Month

“Trying to predict what’s going to come at us next in this tracklist is like trying to pinpoint when and where a hurricane is going to land some twenty years from now. STREAKING IN TONGUES’ Oh My Darlin’ is an undisputed classic and an album for the ages.”

“Ronnie Ferguson and his extraordinarily talented son Elliott deliver a record that borrows equal parts from Songs of Pain, The Velvet Underground, Rain Dogs and A Saucerful of Secrets, but is inevitably recognizable as being theirs and theirs alone. Oh My Darlin' is a melodic lo-fi masterpiece."

"STREAKING IN TONGUES sample ambient, experimental, noise, folk, traditional singer/songwriter music and garage rock influences in Oh My Darlin', and even if it might be the most angular album that this pair has released so far, it's also one fo the most important records to hit stores this October."

“STREAKING IN TONGUES reestablish themselves as melodic marksmen capable of finding something glittery in even the grimmest of sonic environments. Oh My Darlin’ is one of the best of 2019. Five stars, without a doubt.”

“They come to us haggard in one track and glistening in another, but no matter what occasion on which we’re visited by the simple string harmonies that dominate the whole of STREAKING IN TONGUES’ Oh My Darlin’, we’re met with just as much of a storyteller in their vibrations as we are in the powerful, emotion-filled lead vocal. The chemistry that this duo has can only be found in familial musical groups, and specifically between the collaboration of a father and son, and it’s incredible to hear it experimented with in such a freeform capacity.”

“In the last couple of years, critics have come to adore STREAKING IN TONGUES for their home-style harmonies and breathtakingly emotive experiments in noise and pop nuance, and what they deliver unto us in Oh My Darlin’ might be the quintessential release of their career together.”

“On the surface, STREAKING IN TONGUES take a twisted carnival soundtrack and inject it with smart, self-aware lyrical fodder in ‘Irrational Blues,’ but when we look deeper at this song – and all fourteen of its tracklist neighbors in the brand new album Oh My Darlin’ – we discover an emotional ballad that is as driven by acidic jazz rhythm as it is broken folk melodies. In all of the songs that come out of the shadows following ‘Sure as Heaven,’ there’s a confidence that you just can’t find in popular music anymore, and it’s generated by both the assault of STREAKING IN TONGUES and the vibrancy of the music they create when they’re performing in total synchronicity.”

"The harmonies float as high as the heavens can take them in 'Wait Wait Wait Wait Wait for Me,' and while STREAKING IN TONGUES stir up a similarly transcendent vibe in the Harry Nilsson-reminiscent 'Inside out and on My Ass,' they're no less a captivating gem as they are in the violent 'Sunlight of a Thousand Babes,' cowpunk swing tune 'Sure as Heaven' or the self-explanatory 'Irrational Blues.' In STREAKING IN TONGUES' latest record Oh My Darlin', the father and son-led band tries what other artists are often too hesitant, or too inept, to attempt, and to say that the results are some of the finest that the avant-folk scene has heard this year would be just too great an understatement for anyone to make."

“Oh My Darlin’ is an LP defined by its dualities, and in a startlingly single-threaded chapter of pop music history, it’s all the more a diamond in the rough because of the diverse array of compositional styles it weaves together so perfectly. The father-son pairing absolutely kills it.” 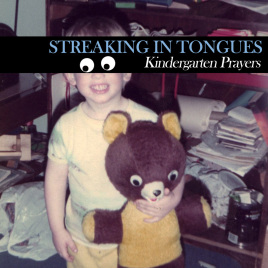 “Kindergarten Prayers is a melting pot of fundamental melodies, and it reminds me a lot of what our world is starting to look and feel like; a diverse collection of amazingly unique tones, each with something special to offer. From one song to next, it’s like we’re being sucked into a vortex of raw colors that are merging together to create something we’ve never seen before. It’s grainy in the most elegant way you can imagine and it ends up, perhaps unintentionally, being one of the most articulate albums of the latter half of the decade.”

"The last album by STREAKING IN TONGUES Life Support hinted at the kind of maturity they display on this record, but nothing could have prepared us for its shimmering tonality. Kindergarten Prayers is like an animated dream sequence that plays out before our very ears one scene after another, each more exquisitely indulgent and provocatively severe than the one that preceded it. STREAKING IN TONGUES takes us on a different adventure every time they record a record, and in this case, the theme is definitely innocence itself, and the way that chief songwriter Ronnie Ferguson goes about unfolding this story is spellbinding to put it mildly."

“There isn’t another record out this year that is as stylishly experimental as Kindergarten Prayers is, and even if the idea of an album as eclectically compiled as this one is a little intimidating, trust me when I say that this is an exceptionally accessible slice of avant-garde gold. This is the best album I’ve reviewed this year, and the competition doesn’t even start to come close with this one. Kindergarten Prayers is a record that requires a lot of attention, but if you’re inclined to sit down and really give music the focus that it deserves, you’re in store for a magical journey led by a father and his young son that will introduce you to the darkest and most opulent of melodies you’re going to hear in the 2010's presented in stunning technicolor.”

"When it Comes to Dreaming", "Cold Summer Tent Revival", "Your Arms", "Around in the River", all three title tracks and "Little Country Boy" could have formulated a complete album worthy of a Grammy nomination all on its own, but that wasn't enough for STREAKING IN TONGUES. There's such a myriad of content included in Kindergarten Prayers that it's almost like three awesome records compiled into one mega-anthology of sonic treasures. This is the thinking music fan's record of the year."

“I’ll be the first to say that this album is all over the place, but the pure, authentic spirit behind STREAKING IN TONGUES merits the band more attention than they currently receive. It’s long and sometimes tedious, but Kindergarten Prayers is avant-garde and anti-folk at their best.”

“Kindergarten Prayers is such a viciously unpolished record from a band capable of unbelievable melody that it defies the logic of virtually everyone in the western pop music establishment. There’s no need to argue; Daniel Johnston shaped alternative music more than almost any other singer/songwriter of his time, and his presence and legacy can be located in a lot of today’s pop from one end of the spectrum to the next. Listening to STREAKING IN TONGUES reminds me a lot of listening to Daniel’s Austin recordings; they’re scattered and joyously insular, but beneath their rough exterior exists a harmony and relatability that is unparalleled, unmatched in its intimacy.”

"Art is completely subjective and no two people will look at or listen to the same work and gather the same interpretation; it just isn't possible. But one of the coolest things about Kindergarten Prayers is how it almost puts up a shield against us reading into it. STREAKING IN TONGUES doesn't want us to overly translate their music. They want us to take it in for what it is and let the framework settle in a little. Five or ten years from now, I think critics are going to have a lot of spirited debates over what this album really means. None of them will ever get it right, because when this band recorded this they didn't do anything wrong." 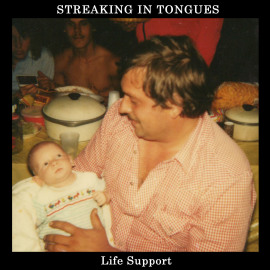 "The 12 ramshackle, experimental tracks recall both Elliott Smith and Daniel Johnston in their raw interiority and desperation. Like similarly-themed records, Sufjan Stevens' Carrie & Lowell and this year's A Crow Looked at Me by Mount Eerie, it's a gauntlet of a listen, but a work of sterling quality." 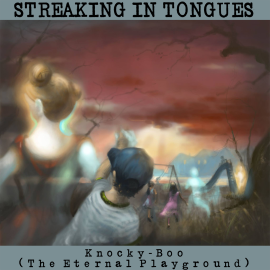 "Ferguson's songs are the perfect mix of sweet and sour; tales of disappointment and addiction as agents of wonder and joy. Deadpan one-liners sung just out of tune bring to mind early Wayne Coyne and Isaac Brock without sounding like he's trying for either."

"STREAKING IN TONGUES' inaugural offering is definitely a full body workout: one part absurdist, two parts shock therapy, and three parts theological stew. Oh, and yes, musical landscapes and lyrical jaunts that are strikingly new and fairly outrageous...not something one should take sitting down."